Broadcast TV Reception out in the Sticks

NOTE: TV antenna installations come in all shapes and sizes! One of our OTA partners recently worked on a unique antenna project and shared his experience with us in this post. 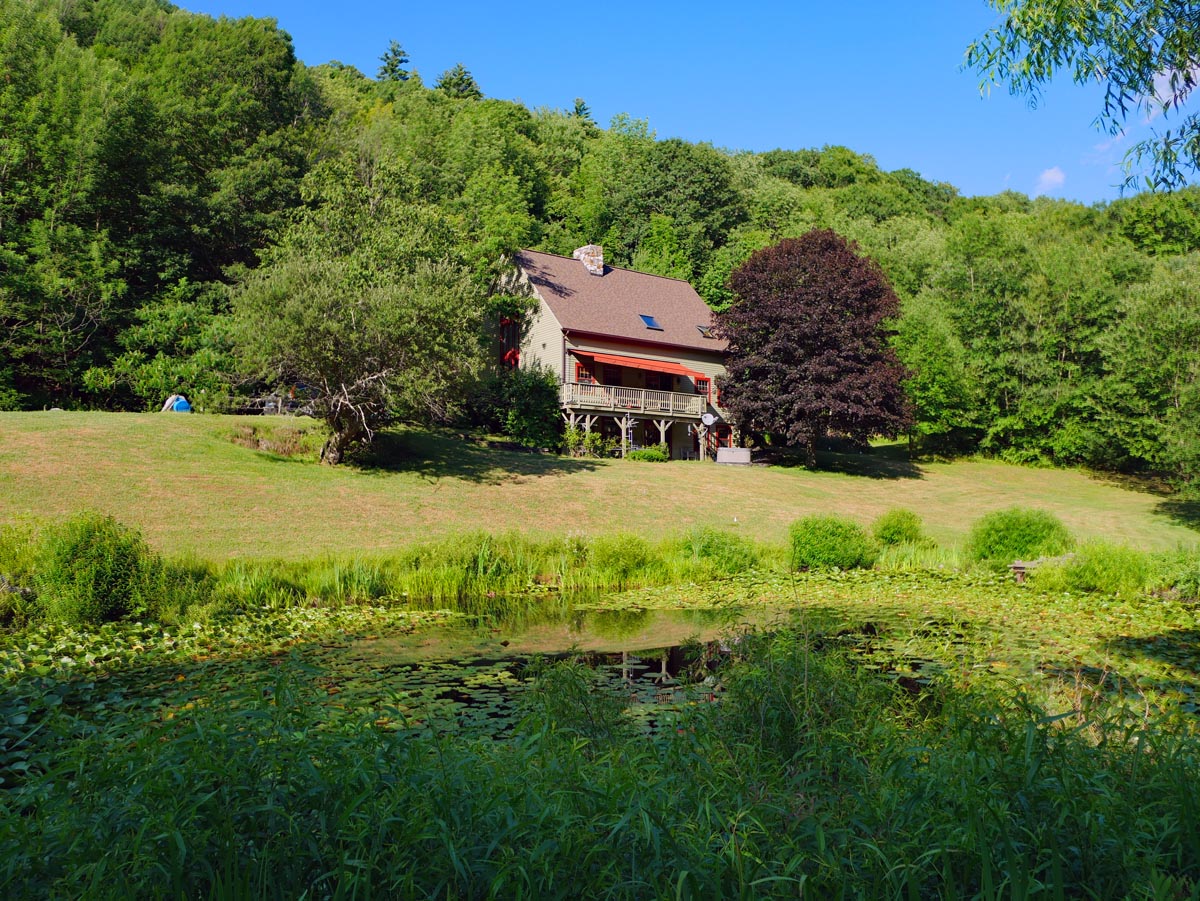 This pretty much fits the description of “a cozy place in Vermont.”

At first glance, the location looked like a lost cause for over-the-air TV reception: A three-story lodge, perched above a small pond on the side of a hill, sits at about 900 feet above sea level in southern Vermont.

While that sounds like a pretty good elevation for over-the-air TV reception, the house is just below the top of a narrow valley, with a wall of hills about a quarter-mile directly to the south that rise as high as 1300 feet, and equally-tall hills directly to the north, right behind the lodge.

Receiving any TV signals at this remote location would be a challenge for anyone. And receiving usable signals from the nearest major TV market - Albany, New York - would appear to be impossible, given the 50+ mile distance to the TV transmitters, behind the hills to the south.

And yet, the homeowners currently have over 30 minor channels of HD programming at their fingertips from ABC, CBS, NBC, Fox, PBS, The CW, and My TV stations. They enjoy having access to local news and weather, something they were hard-pressed to get from DirecTV (which they've subsequently canceled). How is that possible, given the location and obstructions?

Through a signal propagation phenomenon known as knife-edge refraction. (This was touched on briefly in an earlier CM blog post.) In the 1950s, trucks and cars equipped with two-way VHF radios discovered that signals from distant base stations on the other side of hills got increasingly stronger as vehicles approached those hills. Eventually, when the cars and trucks got close enough, the signals abruptly disappeared as if they had fallen off a cliff.

As it turns out, radio waves at VHF and UHF frequencies actually bend downward or refract as they pass over hills, mountains, and even tall buildings. There's no easy formula for calculating how much they bend and where their energy is focused as a result, but the Vermont location looked promising for knife-edge refraction.

Back in 2009, I attached a small combo VHF/UHF yagi was attached to a pole and coupled to a signal strength meter while I walked around the property, looking for any signal peaks. As you might expect, the TV station signals were very, very weak, so some sort of amplifier was going to be necessary. The question was; could I find a spot where the signals were refracting to a high-enough level - i.e. the focal point?

Eventually, I discovered that there was indeed a focal point, but it just happened to be smack in the middle of a large rose bush at the bottom of a deck. Ouch!

With more sophisticated test gear, it was determined that the optimum location for a VHF antenna to pull in refracted signals was about 18 inches off the ground, pointed at around 240 degrees. For UHF TV stations, the sweet spot was higher; about six feet off the ground with the antenna aimed at about 230 degrees. Moving the antennas just a little to the right or left caused so much signal distortion that TV reception wouldn't work…so out came a pair of loppers to trim the rose bush!

Because of the different mounting heights and antenna orientations, two separate antennas were put into service. I recently revisited the location to replace the VHF antenna, a smaller model that was heavily damaged by falling snow and ice carelessly shoveled off the deck and was largely held together by lots of electrical tape. (Not many people can say they broke a TV antenna by shoveling snow on it!) 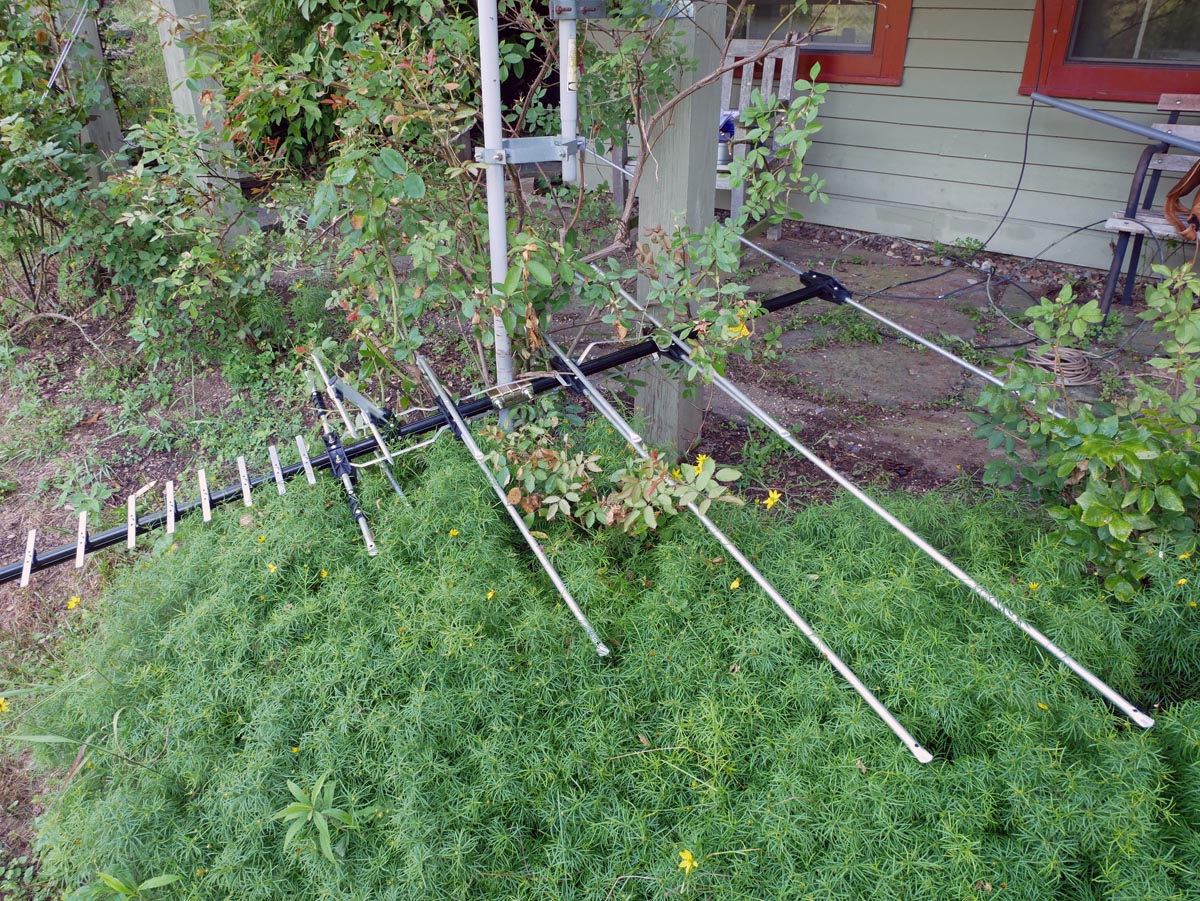 The Masterpiece 60, snugly nestled in a rose bush. 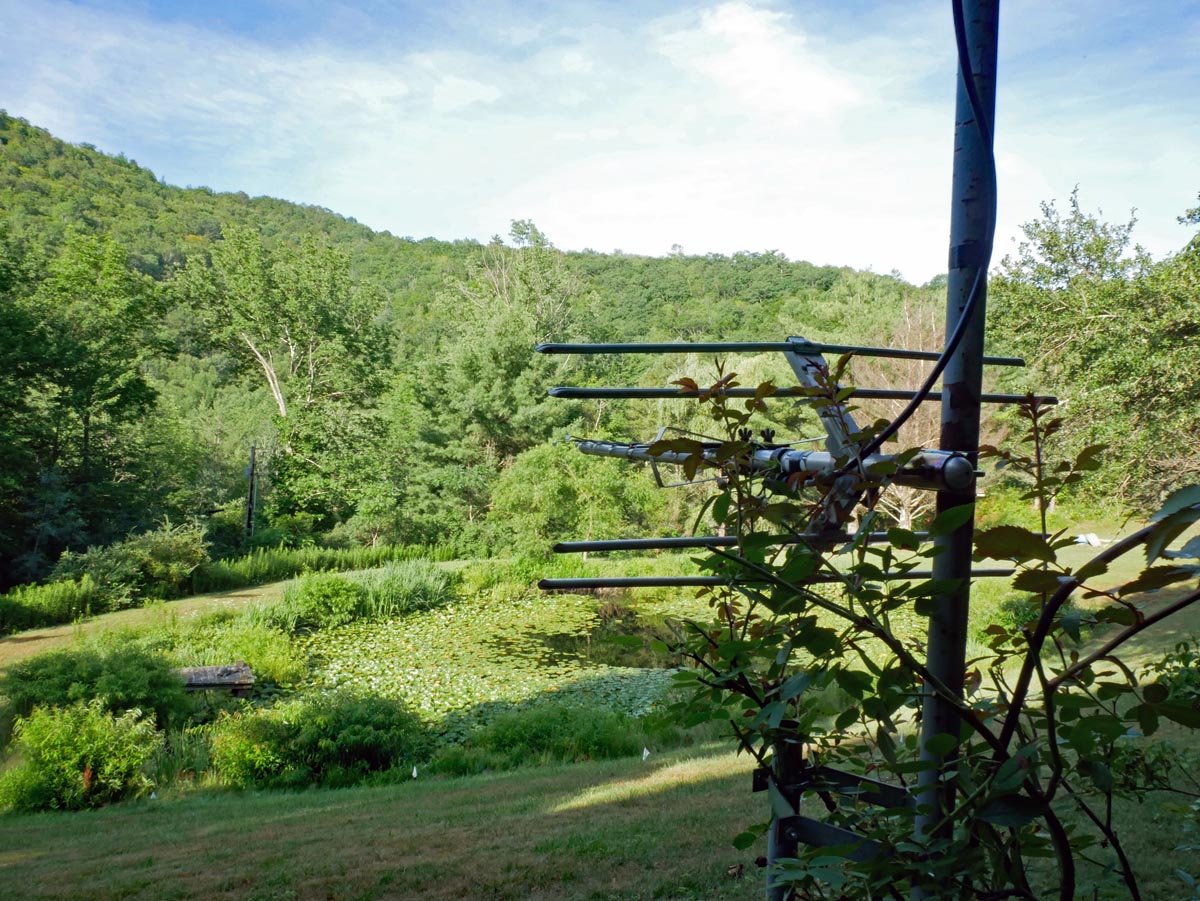 The older #4308 UHF yagi, aimed smack at the hills to the south.

The new “rose bush” antenna is a Channel Masterpiece 60 yagi, with only the VHF section used. I chose it because of its rugged design - one more likely to survive Vermont winters - and ease of installation. For UHF, an older Channel Master Model 4308 UHF yagi does the job nicely. A Channel Master Amplify+ amplifier was installed to replace an older Titan 2 design to boost signals to a usable level, using the “High” (26 dB) setting.

The combined VHF/UHF signal is split just downstream from the amplifier, with one leg going to the main TV in the living room (where the remote power supply for the Amplify+ is located), while the other leg goes through a DC block connection to a second splitter, feeding TVs in two bedrooms. And yes, there is enough signal to feed three televisions!

It took some diplomacy on my part to explain exactly why the VHF antenna “had to be mounted right there in your rose bush,” a discussion that came to a quick and satisfactory conclusion when the wife found out she could now watch several PBS channels and vintage TV programs that were not previously available through DirecTV. Roses do grow back eventually, and will serve to keep curious onlookers away from the antenna array. 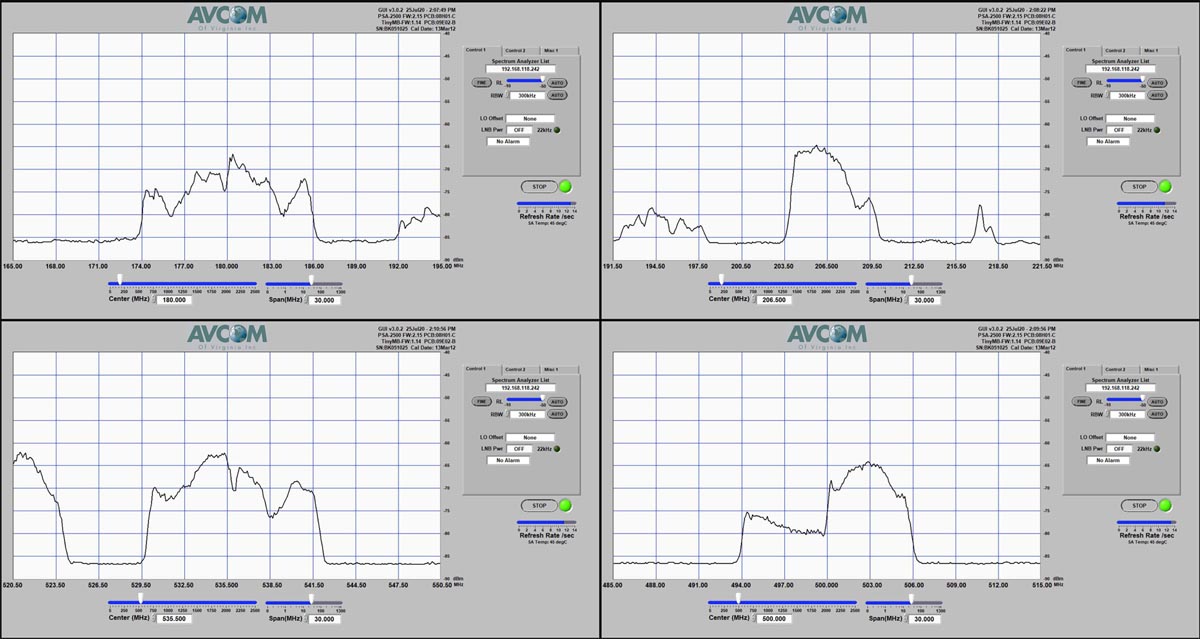 Clockwise from upper left: Spectrum analyzer plots of signals from WNYA-7 and WXXA-8, from WNYT-12, WCWN-22, WTEN-24, and WMHT-25, and WNYT-18 and ION-19. The signals are actually 12 dB stronger than shown at the analyzer's 300 kHz resolution bandwidth.

I've worked on plenty of TV antenna installations over the decades, including some atop towers and on slippery slate roofs. I've also had to make antenna repairs in rain, snow and extreme cold and heat. So, it was a pleasure to complete this installation while simply standing on the ground (and at one point, sitting on it), all the while perched in the shade, under the deck.

To make sure no one inadvertently caused damage to the VHF antenna, alternating rows of yellow and red Scotch 33 electrical tape were wound around the longest reflector element on the Masterpiece 60.

A follow-up phone call with the homeowners one week later confirmed that everything was peachy and that they were busy exploring their TV channel options. While running signal level tests on the finished installation, I also observed weaker TV signals that turned out to be low-power repeater/translator stations, one of which (WNYT-18) was nearly as strong on channel 18 as their signal on channel 12.

A weak carrier from Vermont public TV station WVER from Rutland, on the other side of two close-by large hills to the north, was also spotted on channel 10, but the signal-to-noise threshold was too low to pull it in…although it's possible that signal may be reflecting from the hills to the south, and a separate VHF yagi might find a “sweet spot” for reception. You never know! 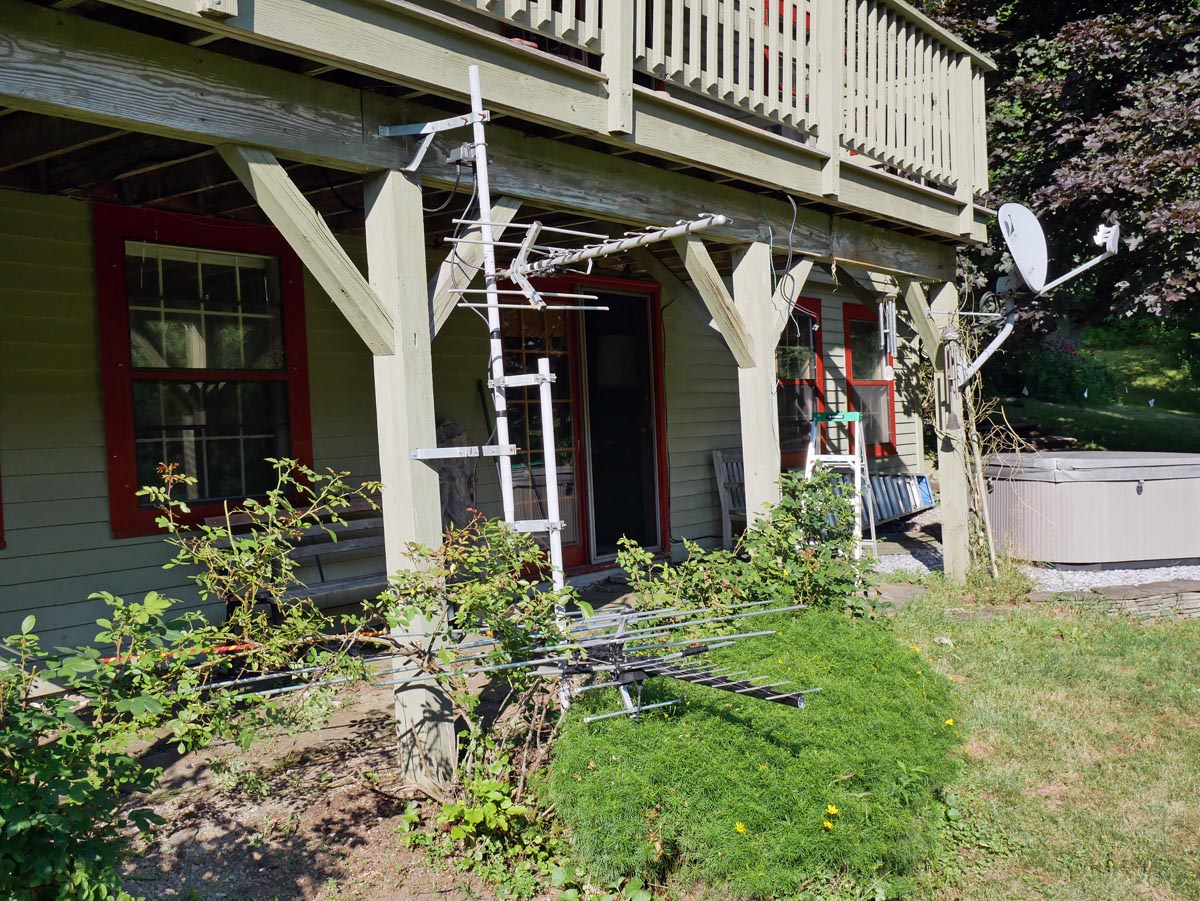 Both TV antennas in their final position, hard at work. The DirecTV dish in the background, no longer needed, will soon come down.