LOOKING TO HOOK UP?

Join two antennas, that is. (What did you think we meant?)

For many viewers of free, over-the-air television, picking up the broadcasts requires nothing more than selecting the right antenna and positioning or aiming it in the right direction, using compass headings provided by www.antennaweb.org or other Web sites dedicated to terrestrial broadcast TV.

But what if one or more of the TV stations you want to watch transmits from a different direction? What are your options? Do you need an antenna rotator? Can you install a second antenna in combination with the first antenna?

All good questions. Truth is; there's no one-size-fits-all solution for this problem. Let's explore your options.

For viewers using indoor antennas in an urban or suburban setting, you are picking up signals from more than one direction already. That's because the electromagnetic waves are traveling from the TV transmitter to your antenna over two or more paths – the direct path (if your antenna is “line of sight” to the transmitter), plus secondary reflections of each signal that have bounced off nearby structures or terrain. These signals are said to be “multipath” – that is; the waves have taken multiple paths to your antenna, although they don't arrive at the same time.

The ATSC digital TV system we use was designed to compensate for signal multipath. In some cases, the direct TV signal can be canceled out by a multipath signal that's out of phase and arrives at your antenna just a few microseconds later. This problem bedeviled early implementations of ATSC, and it took several years to build adaptive equalizers that could discriminate between both types of signals and still provide reliable reception, particularly in multipath-rich urban areas. (We'll revisit this multipath echo problem in a moment.)

For indoor reception, your antenna choices will be limited to omnidirectional models, so your TV receiver will do the heavy lifting with multipath. But for outdoor reception, you may want to use a directional antenna, like a log-periodic yagi. The reception pattern of this type of antenna maximizes signal strength in the direction it's pointed, while unwanted signals to the sides of the antenna will be much weaker. (Yagi antennas also have some sensitivity 180 degrees from the front; i.e. off their back.)

If you are using an outdoor antenna and need to pick up TV station(s) from two or more directions, you have a couple of options. One option is to install an antenna rotator and swing your antenna in the direction of the desired TV station. While this will give you the strongest possible signal, it's impractical and time-consuming when you change TV channels – you have to wait for the antenna to swing around to get reliable reception.

The other option is to install a second outdoor antenna, aimed in the desired direction, and combine it with the signal from the first outdoor antenna. Sounds easy, right? Mechanically, it is: You just need two antennas, two coaxial cable lead-ins, and some sort of combiner, which resembles a two-port splitter used in reverse. The signal attenuation through each combiner port is about 2 dB, but that shouldn't be an issue for urban and suburban TV reception. As a bonus, these combiners also contain an LTE signal filter to reduce interference from mobile phone operations above channel 36.

Is there a catch? Possibly. Although the adaptive equalizers in your digital TV receiver are quite powerful, you might have a problem with multipath echoes causing signal dropout when combining two antennas. It depends on (a) the gain of the antennas you use, (b) the compass angle between them, and (c) the signal strength of your desired TV channels. We mentioned earlier that signal strength on log periodic yagi TV antennas is maximized at the front, reduced quite a bit at the rear, and reduced even more on the sides.

Figure 1 shows this concept in more detail – it's a plot of horizontal signal strength for a small log-periodic TV antenna at different compass headings. The maximum signal rejection on the sides isn't at 90 degrees, where you might expect it. Instead, it's closer to 75 degrees. There is actually some signal sensitivity at 90 and 270 degrees, as well as at 180 degrees. And two additional drops in signal levels occur at 120 and 240 degrees. 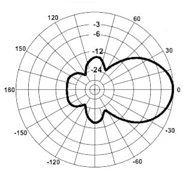 Imagine you are directly above this particular log periodic TV antenna, looking down at it, and you can see the antenna signal pattern. TV signals will be strongest at 0 degrees (antenna aimed directly at the transmitter), dropping by half (-3 decibels of dB) at 30 and 330 degrees, and decreasing by an additional 9 dB at 45 degrees and 315 degrees. Maximum horizontal signal rejection with this antenna occurs at about 70 degrees and 290 degrees, with additional notches at 120 and 240 degrees.

If the secondary TV station(s) you want to watch are located at 70, 120, 240, and 290 degrees from the direction you use for primary reception, then simple coupling of two or more of these antennas may work just fine – the equalizer circuits in your digital TV won't be taxed. (Note that these compass headings are just “ball park” numbers, and will vary across different log-periodic antenna designs.)

This combining task is made even easier with UHF antennas. It's possible to get 15 dB or more of signal rejection between two UHF TV panel antennas when mounted at right angles, and even more isolation back-to-back. And if your VHF TV signals arrive from one direction and your UHF signals from another direction, use a UHF-only antenna for the latter signals. You won't see any VHF multipath echoes through that second antenna.