One area often overlooked when installing a high-quality OTA network is replacing the existing coaxial cable that has been on the house for years. It looks good, right? Well, looks can be deceiving. Old cable can hide many faults that aren't obvious by looking at it, and physical damage may be overlooked or hidden.

The image below shows the components of coaxial cable. The dimensions and condition of each of these components are critical to its performance. One major concern is that the cable is not smashed or deformed. This can happen when the cable is pulled tight around a corner, kinking the cable. This will have a major impact on its performance. How about sliding the cable under the carpet to get across that doorway? Every time someone steps on the cable, it gets smashed a bit more, again causing problems with the signals going through the cable. Anything that deforms the cable will cause signal problems, including using staples to attach the cable to the house. Only correctly sized cable clips designed for cable (about 0.275 in/6.99 mm for RG6) should be used to keep from compressing the cable. And, please, don't hit the cable with the hammer! 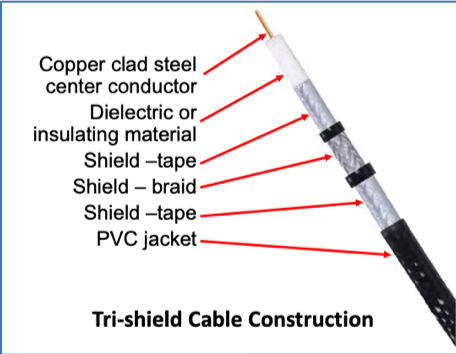 Other issues with aging cable that aren't obvious include moisture inside the cable, cracking PVC jacketing due to UV exposure and wide temperature variations, and degradation of the aluminum shielding tapes and braid. Each of these will impact the performance of the cable.

One of the most common, and most serious, issues is moisture in the cable. This usually occurs because the PVC jacket is damaged in some way. It is not uncommon to find nails or staples through the jacket, holes in the jacket from rubbing against a mast or antenna, or a torn jacket from poor installation practices. Loose connectors can also allow moisture to get into the cable. The moisture can do many things to damage the cable, including:

Each of these are major concerns and are not obvious by just looking at the cable.

PVC, if not properly made, will degrade due to UV exposure from the sun. This will cause the jacket to become hard and lose its flexibility, dry out, become discolored, and start to crack. This allows moisture to get into the cable. Using properly UV stabilized PVC for the cable jacket is a critical concern, and many old and inexpensive cables don't have this feature.

Inexpensive cables frequently are not designed for harsh climates. In North America, temperatures can range from very cold to very hot, and the cable jacket has to be designed to perform over these temperature ranges. Professional grade cable should be specified for operation from -40° F to +140° F (-40° C to +60° C). This is especially critical in cold climates as the jacket can crack once the temperatures get below freezing. Also, by specifying it to -40°, the jacket remains flexible enough to allow connectors to be put on easily even when it is cold.

One of the most important characteristics of coaxial cable is something called Shielding Effectiveness (SE), which is the ability of the cable shielding, made up of the tapes and the braid, to keep unwanted signals out of the cable. Tapes and braids that have degraded will not have acceptable shielding effectiveness. The tapes and braid are made of aluminum, and when aluminum gets wet, it will start to oxidize, which eats away the aluminum. Tapes will also fail over time due to frequent motion of the cable, which will cause the aluminum tapes to crack, allowing signals to leak through.

Many cables sold for OTA use have a single layer of tape over the dielectric that is not bonded to it, and 60% braid coverage (the amount of the dielectric that is covered by the braid). Unbonded tape makes it very difficult to install a connector, and it provides poor SE. Also, with a 60% braid, this cable design may only have around 75 dB shielding effectiveness. In order to keep LTE/5G signals out of the cable, it needs to have about 90 dB SE, both when new and after it is installed.

To provide better SE, typical cable designs will bond the first layer of tape to the dielectric, increase the braid coverage to 77%, and add another layer of tape (tri-shield cable), or even another layer of braid over the second tape (quad shield cable – tape, 60% braid, tape, 40% braid). Standard 77% tri-shield cable will typically have around 95 dB of SE prior to installation, and quad shield will have around 110 dB SE when new. The SE for all cables will degrade during installation, and it will continue to degrade as it gets moved around, which is a major concern with outdoor OTA installations where the cable is constantly moving in the wind.

Channel Master Coax+ (CM-3700B) professional-grade coaxial cables use a unique, patented, design for the tape bonded to the dielectric. This patented design significantly improves the performance and lifespan of the first layer of tape, which is the most critical layer. Using this patented tape, the shielding effectiveness of Coax+ professional-grade coaxial cable is 110 dB, the same as quad shield cable. More importantly, due to the design of the first tape, it will maintain excellent SE over time. The industry standard method of extended life testing of the cable to simulate field applications is to flex the cable in a controlled fashion for at least 10,000 flexes. This testing shows that Coax+ will have an SE of 105 dB or better after 10,000 flexes, and better than 90 dB after 30,000 flexes. Standard tri-shield will be around 85 dB after 10K flexes, and around 70 dB after 30K flexes. Quad shield cable will still be around 95 dB after 10K flexes but will be below 90 dB after 30K flexes.

The advantage ofCoax+ is that it provides better shielding effectiveness than quad shield and standard tri-shield. But there are other enhancements, as well. One big benefit for connector installation is that the outer tape is bonded to the jacket, which removes a step in the preparation for connectorization. Also, it is much easier to install a connectoron tri-shield than it is on quad shield since you don't have that extra layer of braid to jam inside the connector body as it is being installed. And, since Coax+professional-grade coaxial cable has better SE than quad cable, that extra braid isn't needed anyway.

The PVC used to make the jacket on Coax+ meets the requirements of NEC 820, has been tested by Intertek ETL and is listed with CM and CATV ratings suited for in-wall use. It is also tested to UL1581 for UV resistance, which is critical for any cable that is installed outside. The PVC is rated for outdoor use in extreme weather conditions from -40° F to +140° F.

Channel Master Coax+is also environmentally friendly. It is provided in 500' rolls with a plastic wrap, which eliminates the reels, which in many cases can't be recycled.

If you are looking to purchase coaxial cable for your project, check out Channel Master's Coax+ solution.