One of the least understood components of a high quality over-the-air antenna installation is the terminator. The terminator is used to complete the RF circuit. When a splitter or an amplifier with multiple outputs is used in an antenna installation, there is always RF energy on all the output ports. To optimize the performance, that RF energy needs somewhere to go. If you have a TV set or DVR connected to the port, the RF circuit is completed, and the RF energy is utilized by that device. So, what happens if the unused port is left open, or unterminated? To answer that question, we need to talk about impedance and reflected RF energy, and its potentially harmful effects on the desired signals.

The cables, splitters, and amplifiers used in antenna and cable installations have what is called a characteristic impedance of 75 ohms. Basically, impedance is the opposition that an RF network presents to current or voltage change. If everything in that RF network has an impedance of 75 ohms, then there will be maximum transfer of RF energy throughout the network. If there is a component in that network that is not 75 ohms, some percentage of the RF energy is reflected back into the network. The farther away a device or an interface is from 75 ohms impedance, the higher the amount of reflected energy. In reality, EVERY component in the network has some variation from 75 ohms, so every component is reflecting a small percentage of the energy. As long as the percentage is small, the reflected energy isn't a concern.

An unterminated RF port has 0 ohms impedance. When RF energy reaches an unterminated port, 100% of the energy is reflected back into the network, which can cause problems with TV sets connected to other ports. The digital signals used by TV stations today are designed to be robust, but high-level interfering signals can cause picture problems. TV sets include an error correcting feature that can help repair lost digital information, but that only works up to a point. If the interfering signals are too high in level, the errors can't be corrected, resulting in issues with your television signals such as pixelization and macroblocking of the video or possibly even loss of video all together.

The specification most often used for reflected energy is called return loss and is measured in dB. The higher the dB value, the less energy is reflected. But what does that really mean? Many of the terminators that are on the market today are specified at around 15 dB return loss. That means they will reflect 18% of the signal back into the network. Based on the strength of the received signals, and any other interference that may impact those signals, that may be too much reflected signal, which can degrade the pictures. A high-quality terminator such as the Channel Master CM-7100 Professional Grade Antenna Port Terminator is rated at 40 dB return loss in the OTA frequency range, which means it will reflect about 1% of the energy, absorbing the rest of the RF on the port. 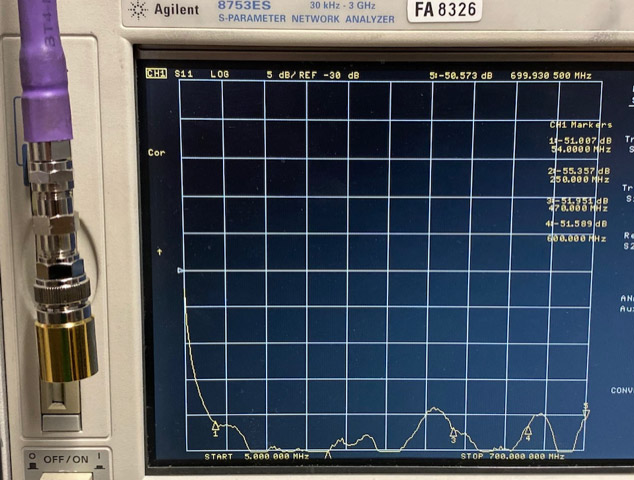 Another concern with leaving ports unterminated is the potential for other interfering signals, such as LTE phones, IoT devices, and other RF signals, to enter the network through the unterminated port. Many appliances and other electrical devices can also create RF noise. Unterminated ports are a significant source of this type of interference, which can degrade the performance and cause pixelization, macroblocking, and other problems with the TV signals.

The bottom line is that for the best performing over-the-air antenna system, all unused RF ports must be terminated, and using a DC blocked, high return loss terminator will ensure the highest quality pictures.