Real World Signal Propagation - What You Need to Know

GETTING TV SIGNALS FROM POINT A TO POINT B

In our last article, we discussed the channels and frequencies used for broadcast television. Now, let's take a closer look at how those signals depart the transmitter tower and ultimately wind up at your TV antenna.

The term "broadcast" sums up the process nicely. Each TV station connects a powerful transmitter to an antenna mounted atop a tower, building, or on a hilltop and attempts to send out signals over a broad coverage area, reaching as many homes as possible. In the older days of analog television, engineers would determine the required power level and signal gain of the antenna to draw their "A" signal coverage area (strong signal with little noise) and "B" coverage area (not as strong a signal and noisy, but still usable).

In some areas, 'broad' signal coverage meant a lot of signal would be sent out to areas with little to no viewership, such as over oceans, into remote mountains, and over deserts. In these cases, the transmitting antennas were ultimately modified to focus the TV signal (or pattern) over specific geographic areas while minimizing it over other, unwanted areas. After all, how many coyotes and fish watch TV?

With simple antennas, the photons radiate from the antenna equally in all directions. If you could inject a magical photon ink into the cable and see the radiated signal pattern, it would resemble a sphere. All well and good, but there aren't many viewers situated above the TV tower, so the antenna (actually, a combination of separate antenna elements) is designed to focus most of its energy in one geometric plane.

For television broadcasting, the most commonly-used antennas send out signals that are horizontally polarized. That is; the plane of the TV signal is parallel to the earth's surface. That's why outdoor TV antennas are positioned horizontally and not vertically. Ideally, over a line-of-sight path from your home to the TV station, the horizontally-polarized signal stays that way.

The transition to digital TV broadcasting in 2009 didn't change things all that much, except there are no "A" and "B" signal contours anymore. Now, the digital TV signal is perfect right up to the point where it falls below the minimum signal-to-noise threshold, where it drops out suddenly (also known as the cliff effect). But some new wrinkles have been added: The newest version of digital TV, known as ATSC 3.0, will enable reception by mobile devices like your phone, or a TV in your car.

These devices generally do better when receiving a signal that is both vertically and horizontally polarized, especially in moving vehicles. To serve this new audience plus those traditional viewers at home, TV stations can install antennas that create a circular polarization pattern with both vertical and horizontal components, although it will require more transmitter power. (Circular polarization is also used to communicate with orbiting satellites.)

We mentioned the ideal signal path a moment ago. In the real world, there are often obstructions between your TV and the transmitter tower. Not only that, signals can bounce off other objects before arriving at your antenna. The resulting secondary, reflected signals, known as multipath signals, take different paths to your antenna and can either provide you with reception in otherwise inaccessible areas, such as in a cluster of tall buildings, or more likely cause all kinds of maddening interference when a reflection of the TV signal arrives at your antenna out of phase just a few microseconds after the original signal, causing reception to break up or drop out.

This multipath interference problem bedeviled the digital TV system when it first started testing in the mid-1990s. It took a lot of research, mathematical calculations, and chip development over a decade to come up with circuits to handle interference and dropout from multipath signals. Today, these adaptive equalizers provide reliable digital TV reception even in dense urban environments, ensuring you're not driven crazy by your favorite programs freezing up or abruptly disappearing.

Signals from VHF and UHF TV and radio stations behave in a largely predictable fashion. They launch from the antenna at the correct polarization angle and mostly stay that way, growing weaker as they travel farther from the transmitter. But if they collide with an object along the way and are reflected, all bets are off – the initial polarization can change drastically from horizontal to vertical, or more likely something in-between. At UHF TV frequencies, the difference between horizontally and vertically-polarized signals can be as great as 10 dB, or ten times the signal level!

If the signal from the TV station is strong enough at your home, a slight shift in polarization caused by these reflections shouldn't cause you any serious reception issues. Remember that, in the early days of TV broadcasting 60 years ago, the average homeowner had to deal with a pair of collapsing vertical whip antennas (a/k/a rabbit ears) to watch horizontally-polarized TV signals, frequently moving the antennas through different angles to get the strongest and cleanest picture and sound and eliminate pesky "ghost" images caused by multipath.

Other 'tricks' of signal propagation can come into play. If you live near a lake or other large body of water, you may find that signals from distant TV stations become noticeably stronger at night, thanks to a weather phenomenon known as "tropospheric ducting." A layer of cold air becomes trapped between layers of warm air, forming a virtual "duct" in which VHF and UHF TV signal can travel hundreds of miles to some very surprised viewers. "Ducting" is not unusual in late summer and early fall along the Great Lakes, the Atlantic and Pacific coasts, and across the Gulf of Mexico.

Another even stranger phenomenon is known as knife edge refraction, where TV and radio signals actually refract or bend down as they pass over mountains. Depending on the bend angle, you may be able to get perfect TV reception miles away from the station, even though a tall hill or mountain sits smack between you and the TV transmitter. You may also discover that the optimal position of your TV antenna for this type of reception is closer to the ground, and not up on your roof.

Your TV antenna may well wind up in an unusual location like the one in the picture below that's in the middle of a rose bed below a deck, overlooking a fish pond. This is the "magic" spot for both VHF and UHF TV reception at a location in southwestern Vermont, up a remote valley and blocked in the direction of the Albany, New York TV transmitters by a hill 300' taller and half a mile away. And those transmitters are 50 miles distant – yet, they come in reliably every day, rain or shine. (And the rose bushes keep people from walking into and breaking the antenna!) 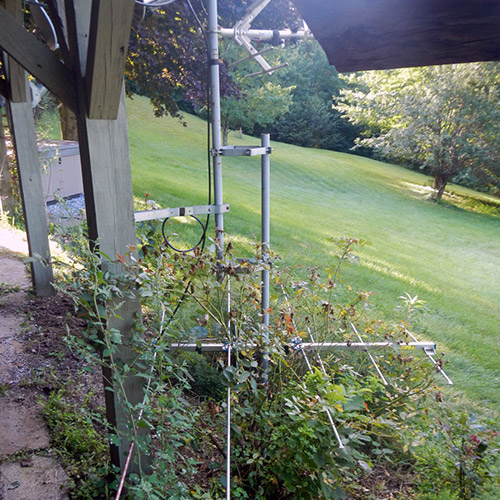 The key to receiving digital TV signals over-the-air is to have a high enough signal-to-noise ratio to lock up that clean digital picture and audio. Choosing the right antenna for the job and positioning it correctly goes a long way to making that happen! Stay tuned for more tips…